After completing the year-long screenwriting program at Interspherial Drehbuchschule in Stuttgart, I’ve since had feature-length comedies produced in Germany (I’m an American who is fluent in German). 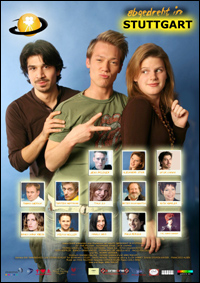 (“Abgedreht in Stuttgart” in German)

Season one of the German cable series

A romantic TV series about being young, in love, and a little lost in a city full of comic misunderstandings.

Abgedreht in Stuttgart, or “Crazy in Love” premiered on the silver screen at the thirteenth annual Filmschau Baden, a film festival in Southern Germany. We, the authors, conceived the first four episodes as a 90-minute film for just such an occasion.

Season two of the series appeared on the silver screen as…

(“Wachgeküsst in Stuttgart” in German)

This season’s arc is a romantic comedy involving three pairs. Will the lonely, workaholic Nelly ever slow down long enough to learn the difference between love and lust? The first four episodes were presented as a feature film at the fourteenth annual Filmschau Baden in Stuttgart.

Scroll down for more pictures.

Photo Stills from the Set 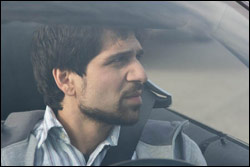